On this page I have added some unedited video clips and stills that give a bit of the flavor of the experience for photographers who have booked a tour or are considering booking.

To start, this is what all the effort is for! This female grizzly bear was nicknamed Sophie. She was the most regular visitor to this viewing site, the most distant from camp, and where we spent the entire week in 2018. This was shot with a 16-mm wide angle lens while sitting in the snow on the river bank - at closest approach she was about 4-m (12-ft distant). Our local guide was standing directly behind us as this clip was shot, shotgun in hand, and watching for any signs that Sophie might be thinking of anything other than chasing down a ripe chum salmon.

Rolling the helicopter out of the hangar in Dawson City 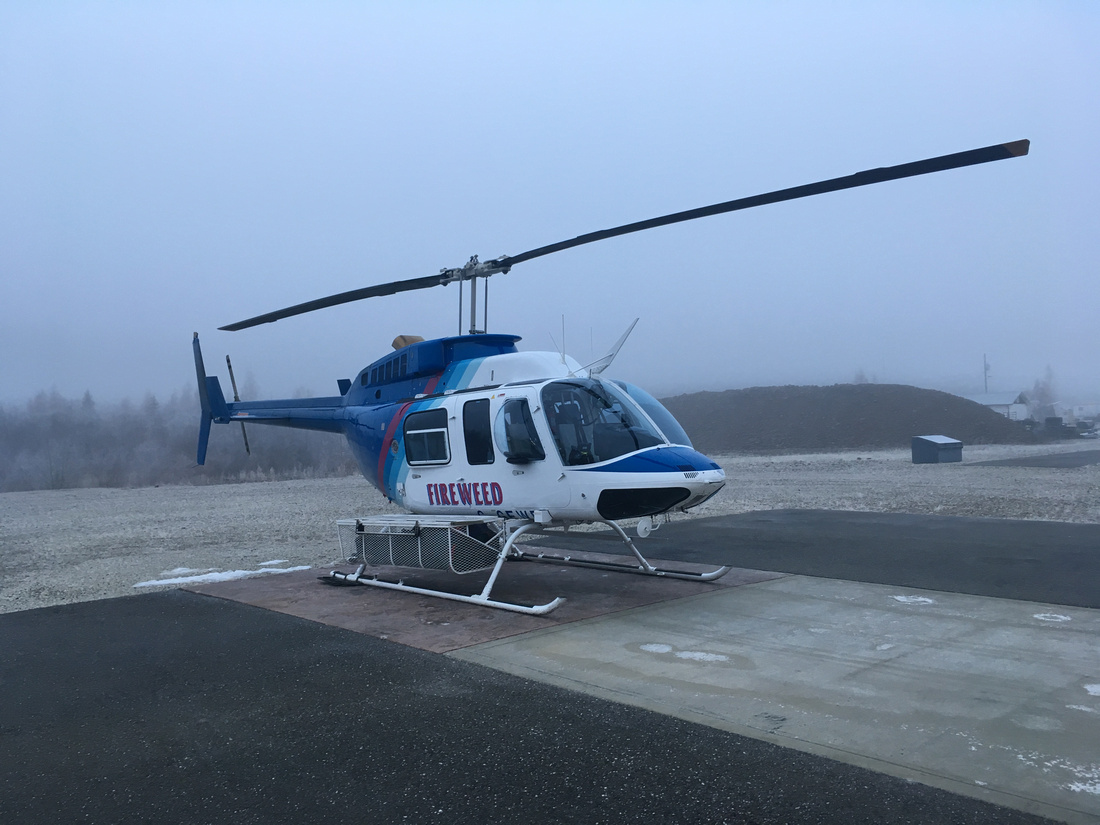 Note the foggy background - weather like this is why we allow 2-days on the way in and out. We were unsure we were going to be able to fly until about 30-minutes prior to departure. 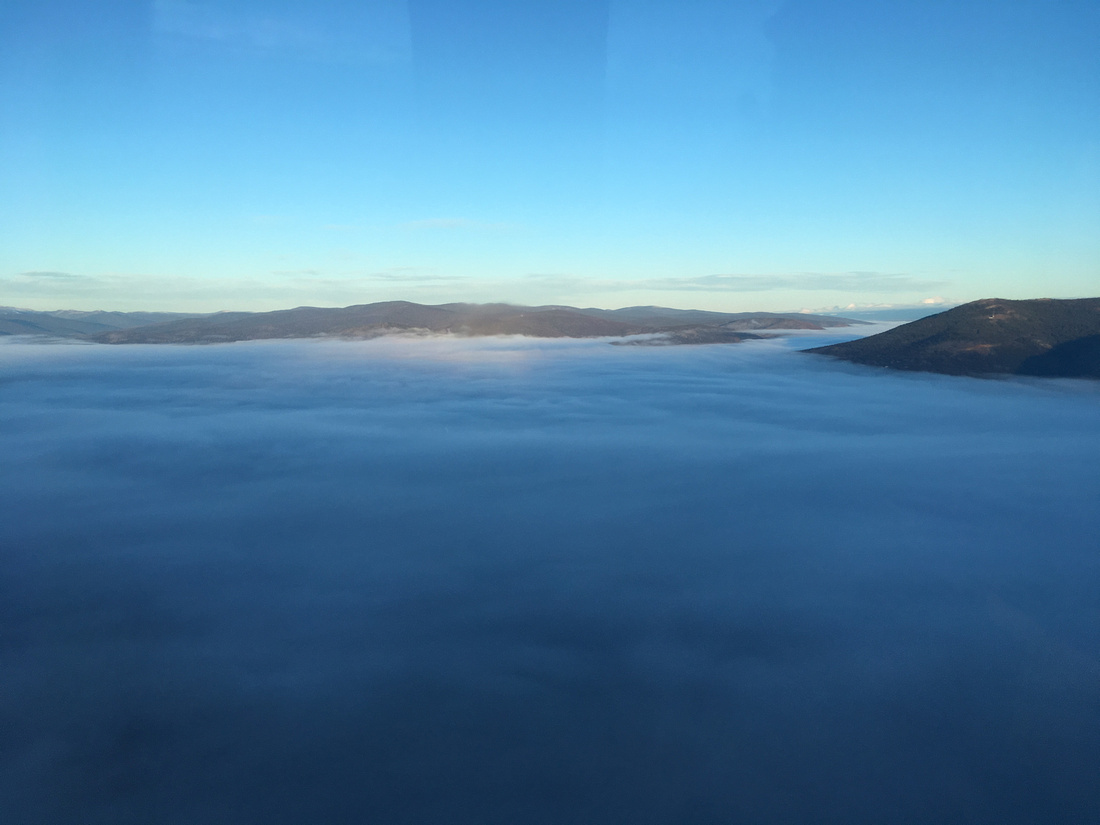 Fog over the Yukon River valley

The view from above once we cleared the fog bank over the Yukon River. We encountered fog on the return trip as well - we landed the helicopter without problems but the following day, the commercial flight back to Whitehorse was not able to land at the Dawson airport. Because our group of four all had international connections to make to get back to Europe (I was living in Sweden at that time), we ended up hiring a taxi for the 500+ km (300-mile) drive south to Whitehorse. For anyone with must-make connections from Whitehorse, you need to realize that this could be your only option for getting south if weather prevents planes from getting into or out of Dawson (this is at your own expense - if I recall correctly, the ride was CDN $1000 and we split 5-ways between our group members and one extra passenger who also needed to get south. So it worked out to about USD $150 each, which we all agreed was far preferable to missing international flights and pending commitments back at home).

Flying towards the Tombstone Range

Shortly after leaving Dawson, we head almost due north up a remote valley, taking us right over top of the beautiful Tombstone Mountains.

Depending on the load and weather conditions, we may or may not need to stop to refuel along the way. On the outward bound trip to Bear Cave in 2018, we did refuel, stopping in at a fuel depot at Eagle Plains, about 400-km north of Dawson. This clip was taken on the way into the depot. 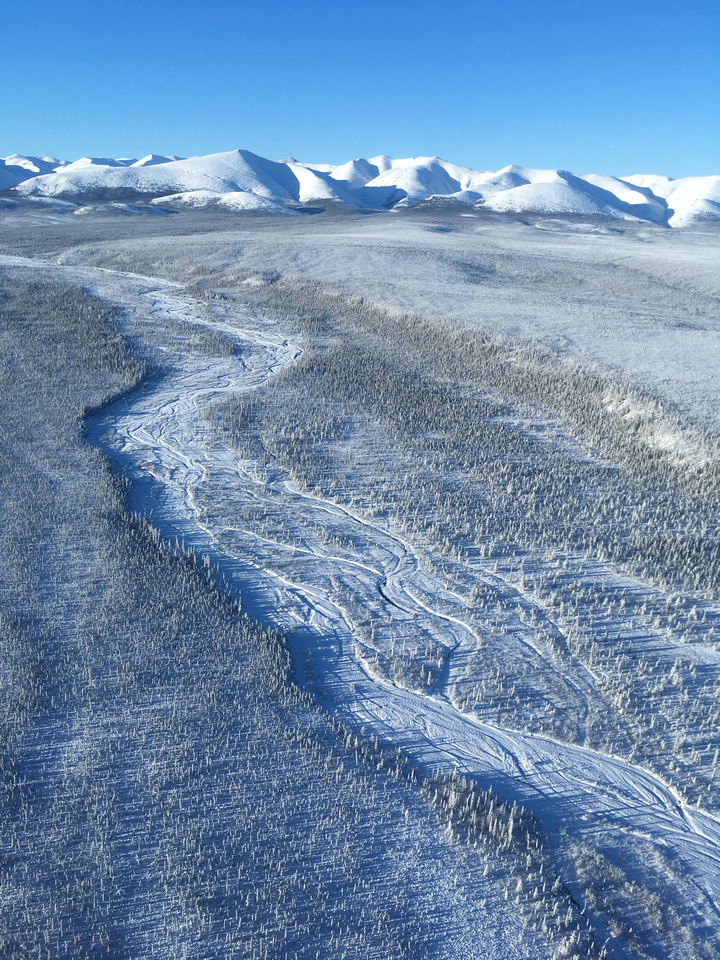 Once in the air again, it is about another 45-minutes north across tundra and sparse forests along the shores of frozen rivers. Bear Cave Mountain is in the range directly ahead; out on the top left horizon is roughly the Alaska border.

Getting closer to Bear Cave, we fly over the upper reaches of the Fishing Branch River. With a little deeper valley and in the shadow of some mountains, with winding path of the river is visible in this clip.

Home for the week - landing at Bear Cave Camp. After touchdown, there is a quick unload of all supplies, we get to meet the photographers from the prior week just for a few minutes, they then hop on the helicopter and it takes off, and we are left in the silent wilderness, probably about 100-km or so from the next nearest human at the settlement of Old Crow. Bear Cave Mountain is part of the Ni’iinlii’njik (“where fish spawn”) Territorial Park of the Vuntut Gwitchin First Nation, whose land we are guests on during this tour.

Meet some of the new neighbors! 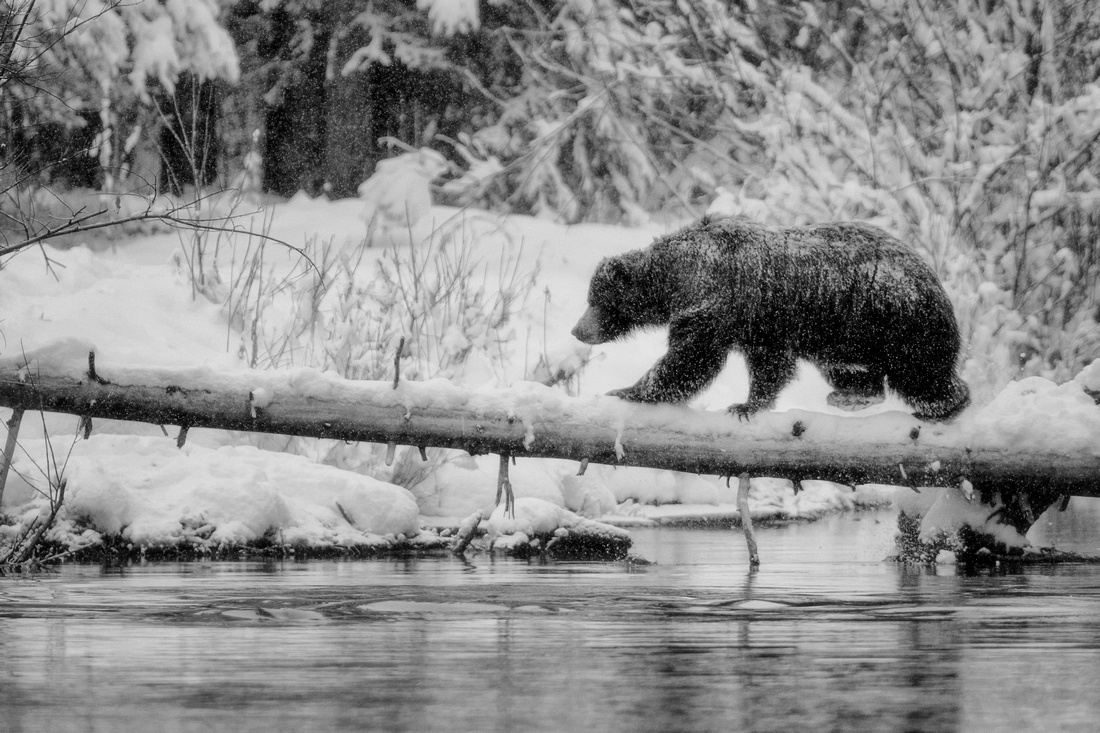 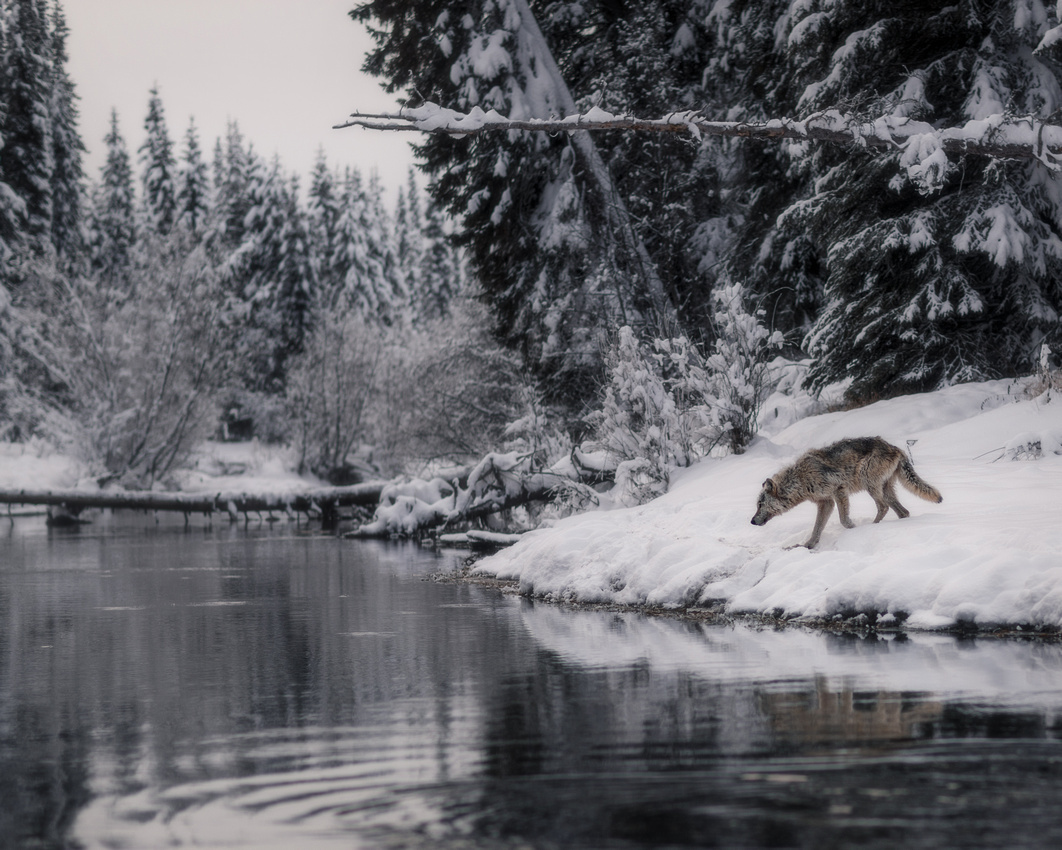 Call of the WildVisiting the northern Yukon in the winter took me back to my favorite childhood books by Jack London. I'd loved the stories of sled dogs and wolves out in the wilds of the Yukon and was delighted that the reality even exceeded my vision of what it was like. Our last afternoon on the riverside, this wolf appeared and non-chalantly wandered down to the creek, not more than 10 m away at times. Taken on the Fishing Branch River, Yukon Territory, 28 October 2018.

My name is Murray Rudd: I am a nature-oriented photographer based in Nova Scotia, Canada